As football lovers, we’re always looking forward to the next game, the next big signing, or the possibility of glory just around the corner. However, the long-time fans among us will know that it’s just as important to look back and savour all of the memorable moments along the way.

That’s what TOFFS is looking to do with our My First Football Memory blog series, which has seen us chat with top football personalities and influencers about the formative experiences that made them fall in love with the sport, and the way those earliest memories have shaped their lives as fans ever since.

For our latest instalment, we’ve been able to sit down with Chris Cowlin, one of YouTube’s most passionate and prolific Tottenham Hotspur vloggers! Chris produces daily content on his beloved Spurs, sharing his views on everything to do with the club, from news, match previews and interviews with Spurs fans and legends to candid fancams from each and every Tottenham home and away game.

His Tottenham Fan Chris Cowlin channel has racked up more than 16 million views and nearly 43,000 subscribers to date and continues to go from strength to strength, giving Chris the opportunity to interview the likes of Mauricio Pochettino and Teddy Sheringham. He was also able to win the title of Best Club Content Creator at the 2019 Football Blogging Awards for his efforts!

As a long-term supporter of TOFFS, we were delighted to talk to Chris about his history of growing up as a football fan, the reasons why he fell in love with Spurs, and his hopes for the future of the club...

Falling in love with football - with family and friends

Watching football on the TV as a kid, I remember thinking: “Wow, this is amazing!” The speed of the game, players working as a team, the glory of winning… those were my first impressions of the game.

All of my family and school friends at the time loved football - let’s face it, who doesn’t? Football is so positive for fans - meeting your friends before and after matches, living through the good (and bad) times with people who you love, and sharing those moments you will never forget.

In particular, my school friends had a big part to play in getting me into the game -  we collected all the football cards as youngsters and would discuss football for hours, talking about facts, stats, players, managers and tactics. They supported a real mixture of teams - Arsenal, Liverpool, Man Utd and West Ham - but I wasn't going to choose any of them, and I wasn't going to let my family choose for me either! 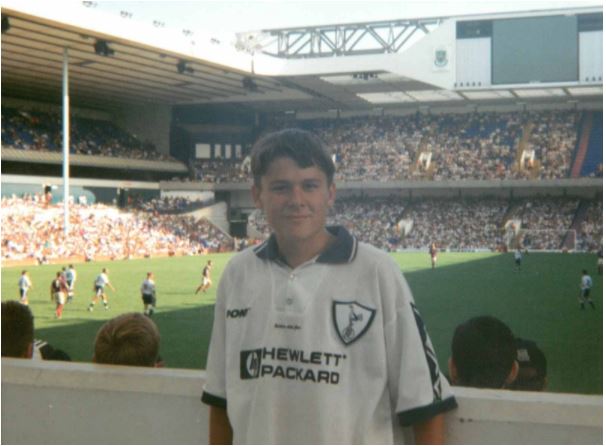 Going against the grain to choose Spurs

I thank my school friend Tom for heavily influencing me to pick Spurs during my school days. Most of my family support Arsenal - the other lot down the road. Liverpool were doing well at the time as well, but once I saw the likes of Paul Gascoigne and Gary Lineker for Spurs and England, there was no other team for me. The style of football Tottenham played and the players we had at the time attracted me and I've never looked back - I made the right choice. Plus, I'm not a fan of the colour red!

My first Spurs game was Ipswich vs Tottenham in September 1993. The game finished 2-2, with goals from Teddy Sheringham and Jason Dozzell. My mum and dad took me and I loved every single minute! Spurs went 1-0 up in the game, Ipswich then scored two goals, and then just a few minutes from time new signing Jason Dozzell popped up to get Tottenham's equaliser. A big moment for him, as he has only just signed for Spurs from Ipswich - a big one for me as well, because from that moment on I was hooked on Tottenham Hotspur FC!

I’d say the first time I truly experienced the magic of football was the 1990 World Cup, followed up by the 1991 FA Cup final. England did so well in that competition, with the Spurs boys Lineker and Gazza at the forefront, and then the FA Cup final victory against Nottingham Forest at Wembley in May 1991 really cemented things for me.

I remember going outside trying to re-enact Paul Stewart's goal and that moment when Des Walker scored an own goal in extra-time which gave Spurs the victory - something I will never forget. As a young kid I thought it was normal to win cups all the time; weirdly, this ended up being the last time Tottenham won the FA Cup! 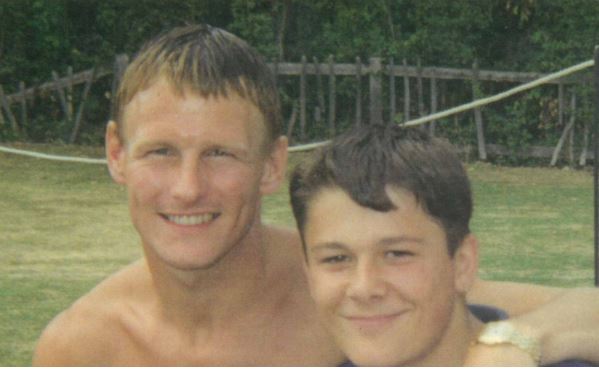 Still, as much as I loved Gazza and Lineker, my real heroes growing up were Jürgen Klinsmann and Teddy Sheringham. I will never forget the day Spurs signed Klinsmann in the summer of 1994 - a real "wow" moment, and what a partnership he had with Teddy! I thoroughly enjoyed watching them play; they gelled together so quickly, and the football and attacking style was so good to watch, even though some of our results were poor. Klinsmann has always remained my favourite player - he brought so much to Spurs with his ability and experience.

Becoming a collector and YouTuber

Throughout my time following Spurs, I’ve always been a huge collector of matchday programmes, tickets, team sheets and everything from the games I go to. When I look over my collection, it brings back such great memories, especially from the first few games I went to. I remember being taken to the games by my mum and dad, us buying a copy of the programme, and me being given my ticket to go through the turnstiles with. I also collected a number of Spurs players’ autographs - something I will never part with!

My YouTube channel got started a few years ago and it’s really grown since then - completely by accident, at least at first! I had taken a few short videos of the demolition of the old White Hart Lane and the building of the new stadium, I uploaded them and people wanted more. It then turned into doing a video each week for a few years, and now I have around 42,600 followers!

It’s become something I really enjoy doing, and I’ve even had the pleasure of interviewing some really big figures associated with the club, including iconic former managers Mauricio Pochettino and Keith Burkinshaw, celebrity fans like Sir Trevor McDonald, and even my childhood hero Teddy Sheringham! 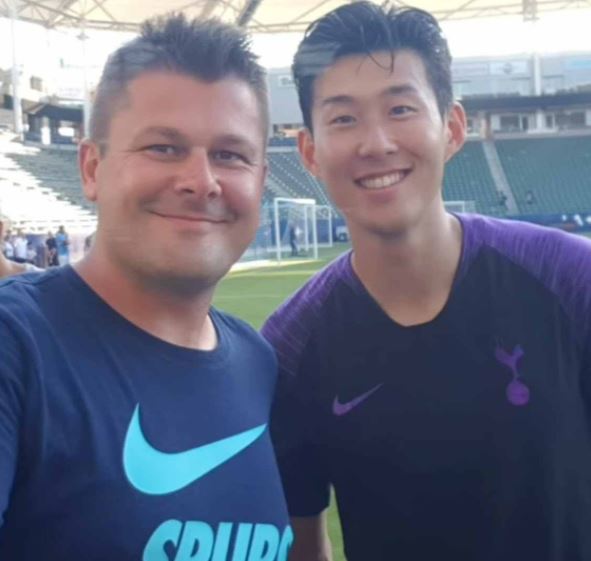 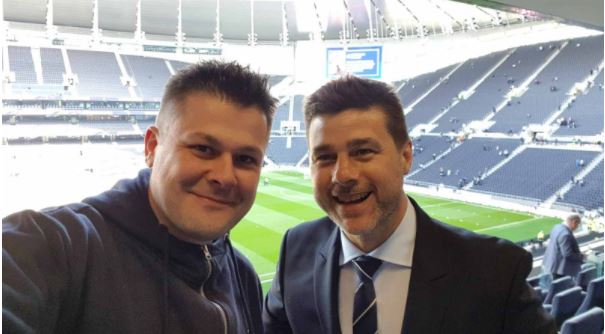 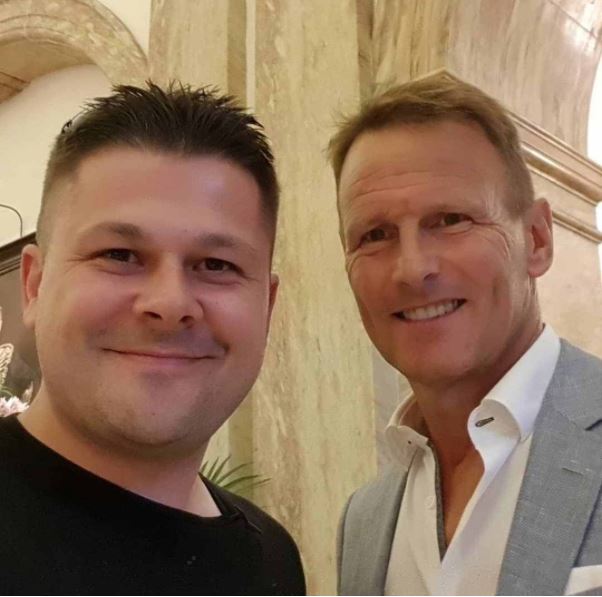 I love all of the Tottenham Hotspur TOFFS collection. It’s been great working with TOFFS in the last few years, it’s a brand I have always worn and it’s a brand that I’ve always loved.

I particularly like the shirts that commemorate the times when Tottenham have won cups in their history, like the 1961 Wembley shirt (when of course Spurs won the double) and the 1984 UEFA Cup final shirt; I love the tracksuit tops as well!

Whenever I see the TOFFS range, I see players like Glenn Hoddle, Ossie Ardiles, Jimmy Greaves and Steve Perryman - true legends of Tottenham Hotspur Football Club. They bring back so many wonderful memories of our great history - I’m too young to remember these players playing for Spurs, but I’ve watched days, months and years worth of footage of my club, and TOFFS’ retro shirts really help bring those memories to life!

Hopes for the future

I go to every game now, and I’m proud to say I follow my club all around the world; it’s also continued to be something I can enjoy with my whole family. For example, in June 2019 I went to the Champions League final in Madrid with my dad and my son, Harry - three generations of Spurs fans together, enjoying us reaching the final! Sadly it wasn’t the result we wanted, but it’s still something we will always remember.

At the time of writing this, I haven’t seen Spurs live in a stadium for over six months due to the COVID-19 restrictions, so I can’t wait until I get back into the ground to cheer my team on properly again. Following this club and this sport throughout the years has been a wonderful experience, and I’ve met so many great people through supporting Spurs.

All I want now is to see Spurs lift a trophy - given that the last one was the League Cup win back in 2008, it’s been far too long!

Thanks so much to Chris for taking the time to share his first football memories with us! If you want to see more of Chris, check out the Tottenham Fan Chris Cowlin YouTube channel, or give him a follow on Twitter at @ChrisCowlin.

Keep checking back with TOFFS for further instalments in the My First Football Memory series! If you’re feeling nostalgic after reading this, have a look at some of our previous entries in this series, including our chats with Jim Daly of Five Year Plan and James Lawrence Allcott.

You can also enjoy your nostalgia trap of your own by browsing our catalogue of retro football shirts from throughout the ages, including our wide selection of retro Tottenham Hotspur shirts from various classic eras!