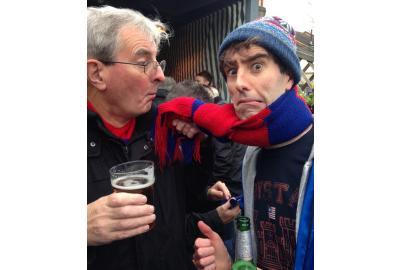 There’s a reason we call football the beautiful game, and it goes far beyond the fortunes of any one team, or a weekend’s results, or even a particularly sumptuous shot rifled into the top corner. Ask any football fanatic, and they’ll tell you the true beauty of the game comes from the irreplaceable memories you make together with your fellow fans, whether they be friends, family members or 40,000 strangers standing next to you, all singing the same song.

Here at TOFFS, we’re all about helping fans reconnect with the heritage of their clubs, as well as their own cherished memories of glory days gone by; that’s why we’re kicking off a brand new blog series called My First Football Memory!

In this series, we’re going to be speaking to football personalities and influencers about their formative footballing experiences, finding out about the first matches they attended, what made them fall in love with the game, and how those memories have influenced their lives as fans ever since.

Our first contributor is the amazing Jim Daly, founder of Five Year Plan, the longest-running fanzine dedicated to his beloved Crystal Palace. Jim has worked in football for many years, attending games as a journalist before becoming a presenter, podcast host and comedian. FYP was set up in 2003 and has since spun off into an award-nominated podcast, with guests including Jason Puncheon, Mile Jedinak, Damien Delaney, Joel Ward, Clinton Morrison and many more.

Let’s turn it over to Jim now to tell the story of his first football memory, in his own words...

The first visit to Selhurst Park

The first time I really remember falling in love with football was the summer of 1994, during that fantastically chaotic World Cup in the USA. Now, this will disappoint my dad because he had already taken me to a Crystal Palace game two years previous to that: January 1st, 1992, at Selhurst Park against Notts County aged seven. 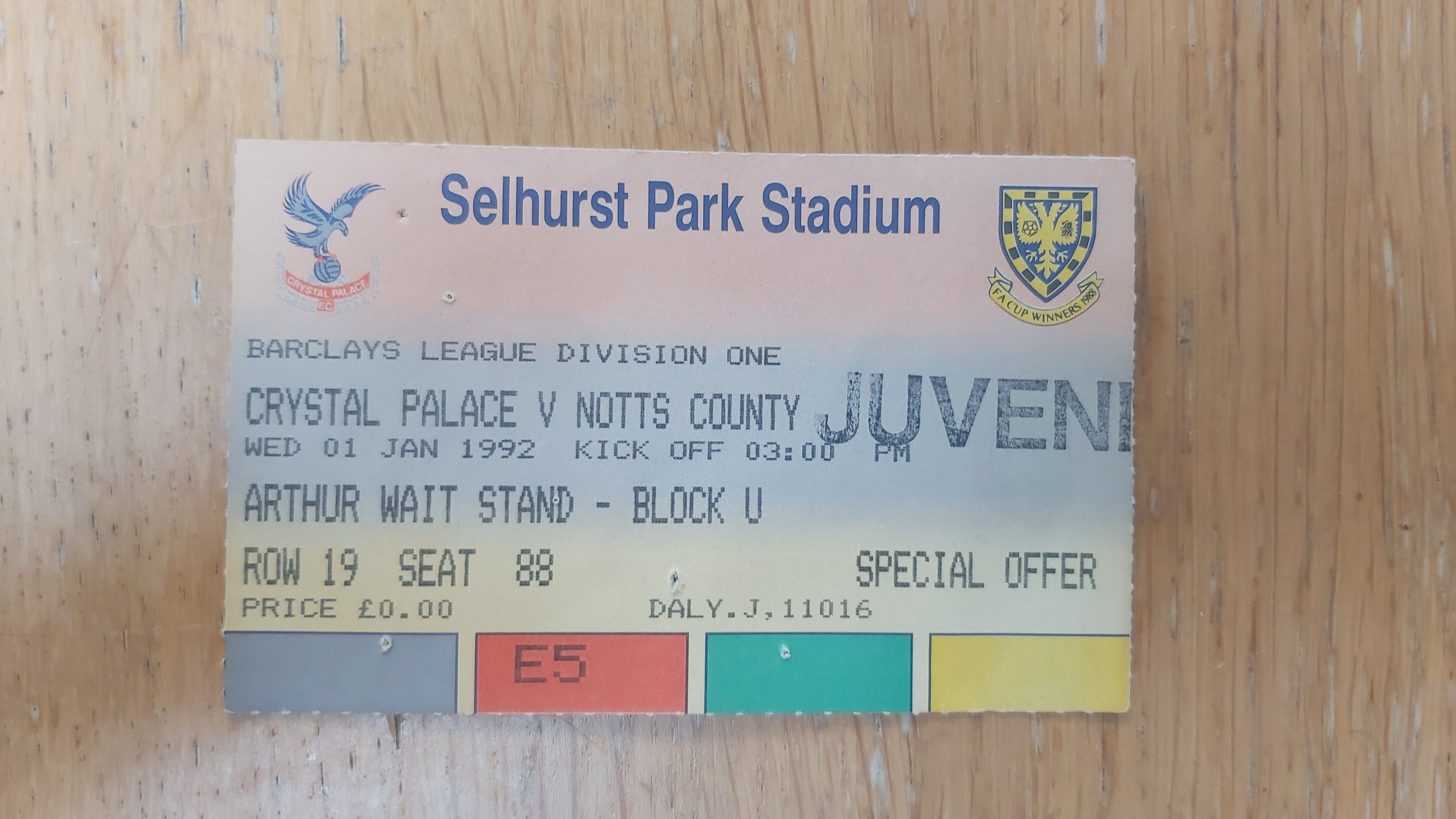 A Palace side reeling from the recent departure of Ian Wright won 1-0 thanks to a goal from the man bought to replace him: Marco Gabiaddini. Having finished 3rd in the top flight the season before - our highest ever finish - and reached the FA Cup final the year before that, little was I to know come my first game that the club was already in decline, and seven years later would be in administration (and then 10 years later, in administration again). It was almost like the club heard I had become a fan, and was like: "Right, he's here lads, time to start being terrible again."

I don't really have any memories of that first game against Notts County, but I do remember my next game, which was six months later on the opening day of the 1992-93 season, the first ever Premier League match Palace played in. They welcomed Blackburn Rovers to Selhurst with a young lad called Alan Shearer in their starting lineup, making his debut after a £3.3m move from Southampton. It was also my younger brother Sebastian's first ever Palace match; he was five and was a bit overawed by the whole thing, while experienced football-goer Jim over here was loving it.

From memory, every time there was a goal the cheers from the crowd were too much for him and he started crying. Unfortunately for him, it ended up being a very thrilling 3-3 draw! I've told this story in the company of my dad years later, who corrected me and told me that actually Seb only cried at the first goal and by the end of the game was loving it. I prefer my version.

We didn't go to many games then as we were pretty young, but Dad did take us to the last game of the 1993-94 season at home to Watford, which was the last game with the old Holmesdale Road terrace before it was turned into a two-tier all-seater stand the following season. After a barnstorming season where Palace had won the old First Division as champions and returned to the Premier League, we of course lost to Watford 2-0 that day, but I remember being incredibly excited that Dad had been on live television, blowing up a red balloon in the background of another fan being interviewed. 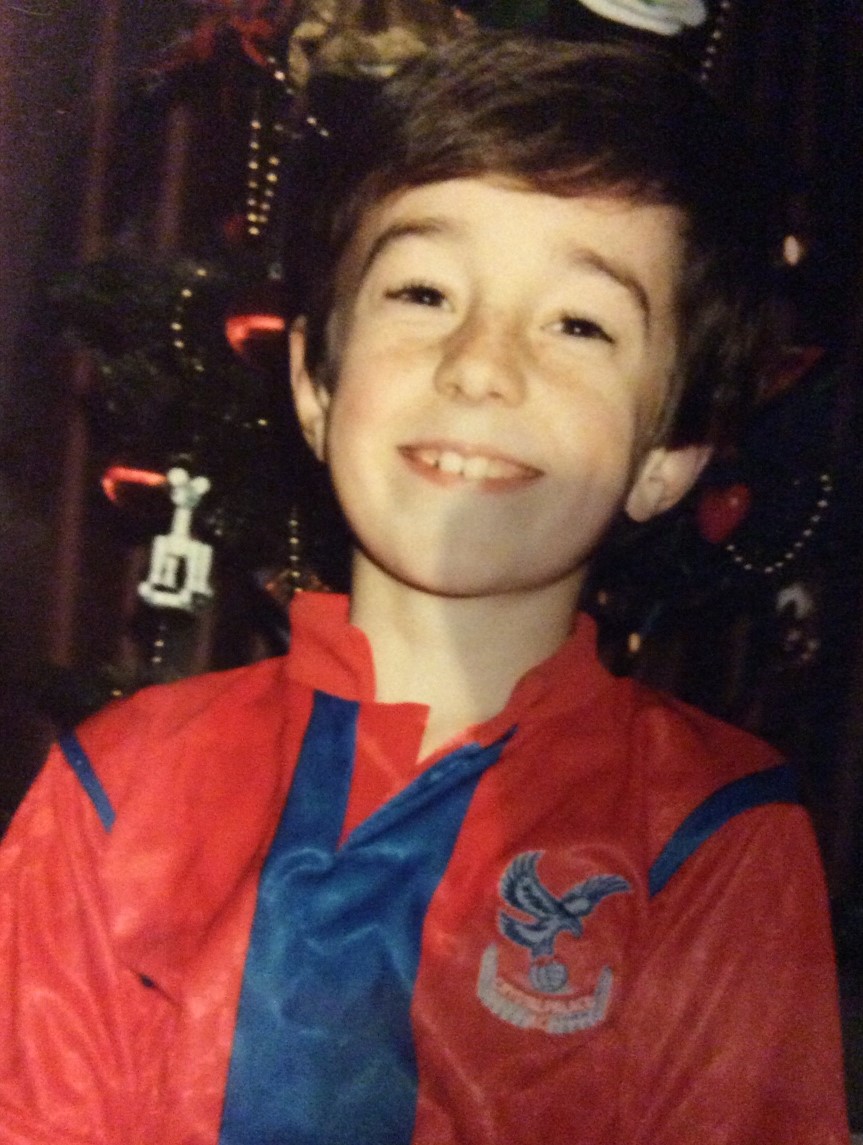 But anyway, back to the summer of '94, and I have memories of being absolutely devastated that Mum and Dad wouldn't let me stay up and watch World Cup matches, which because of the time difference were being shown around midnight. I had become absolutely enthralled with Roberto Baggio of Italy: the grace of the way he played and glided past defenders; his deft finishes; that ponytail which I later tried to grow myself, which did NOT work. Everything about him seemed almost magical and I was captivated.

I took that penalty miss in the final almost personally, and the whole experience led to a love affair with Italian football, Baggio and Juventus in particular that lasted a good few years. When Baggio moved on to AC Milan I already had another Juve no. 10 to move on to in Alessandro Del Piero, who I was desperate to be like for my junior football teams. I bought the same boots as him and I even started wearing little garters in my football socks because he did.

All the while, my dad was probably despairing because having actually got me into Crystal Palace - I had the Tulip Computers home kit, with the giant blue stripe down the middle and little button up collar as my first shirt (see pic above) - I had jumped ship and was all about Serie A. If anyone interrupted my Saturday morning viewing of Gazzetta Football Italia with James Richardson, I went ballistic. I taped every episode and watched them over and over again during the week before the next Saturday's programme.

I once shirked a day trip to France with my school friend John at the last minute because I didn't want to miss AC Jimbo's newspaper round-up and puns! I became obsessed with Juve, in particular their shirts; my most prized possession was a home black-and-white-striped Juventus shirt, with that Danone sponsor, which I wore EVERYWHERE (see below). 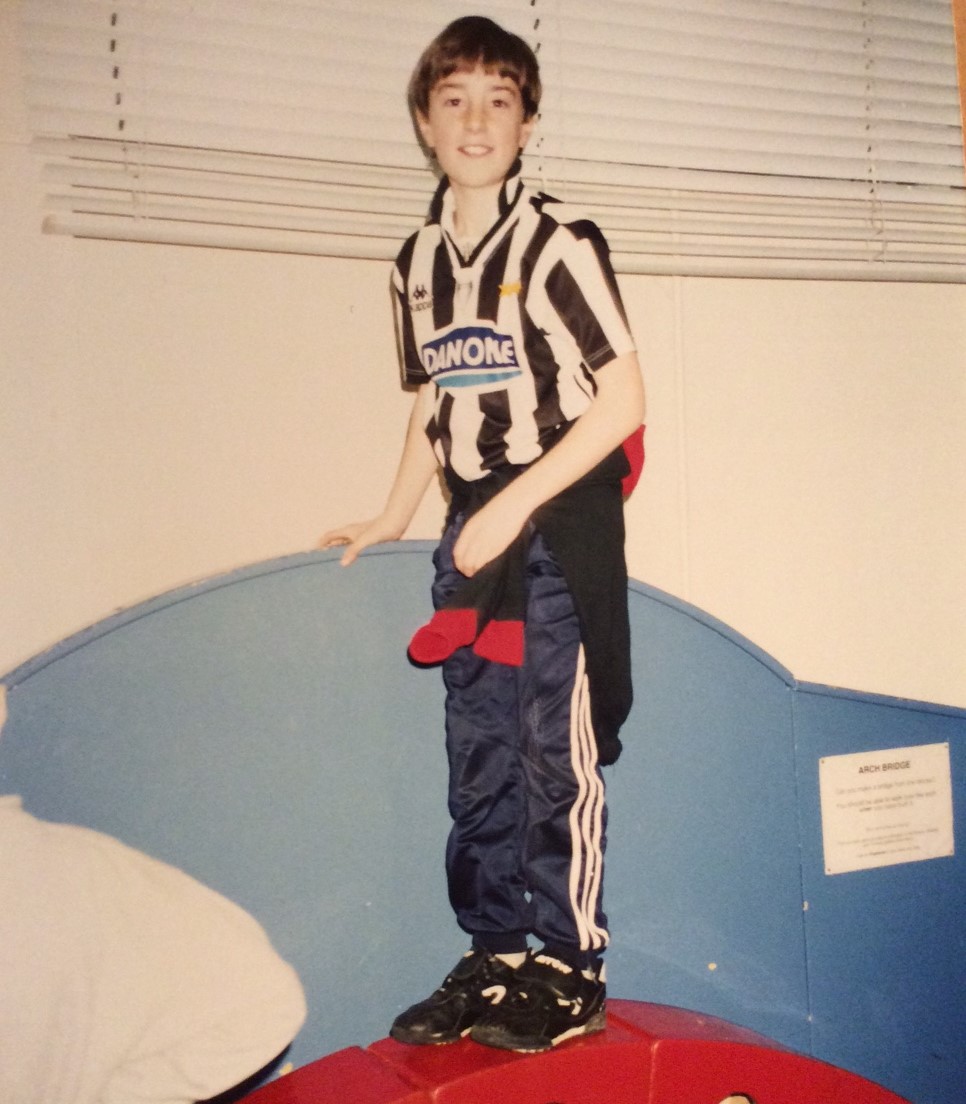 Coming back home to Palace

I shunned Palace for a good three or four years; funnily enough, the likes of David Tuttle and Bruce Dyer just couldn't compete with Baggio, Del Piero and the rest. All that changed, however, in 1997 when my two worlds collided.

I had started getting back into Palace as I had got older and started to realise I could actually go to games and watch proper football on my doorstep. My dad took Seb and me to the 1996 play-off final against Leicester at Wembley, and I remember walking back down Wembley Way crying my eyes out at Steve Claridge's last-minute shinned winner for the Foxes, although really only because I felt I should be crying.

However, when we returned to the Twin Towers a year later for another play-off final against Sheffield United, l really felt it. We were sat right behind the goal that David Hopkin curled his last-minute winner into, and I have such vivid memories of being one of the first out of my seat because I knew it was going in. Coincidentally, every Palace fan I've met since always remembers being behind the goal and the first out of their seat too.

In the summer of 1997 after that play-off final win, Palace actually signed Attilio Lombardo from Juventus, a player I knew very well from all the hours spent watching Gazette. I couldn't believe it - and, to be honest, I still can't really. His year and a half at Selhurst was absolutely magical, and he was even better than any of us ever imagined he would be. That Adidas home kit from our 1997-98 Premier League season, with its little pinstripes either side of each main stripe, is still my all-time favourite Palace kit.

Despite my dalliance with Baggio, Del Piero and Juventus (and also later Inter Milan, as I became obsessed with Youri Djorkaeff), it's only really been Palace for me. Thankfully for me, Italian football became absolutely terrible once the 90s ended, so I had nothing to distract me from committing fully to the Eagles - and a commitment it really has been. I started FYP in 2003 while doing my Media Studies A Levels and never looked back.

What does football mean to you today? 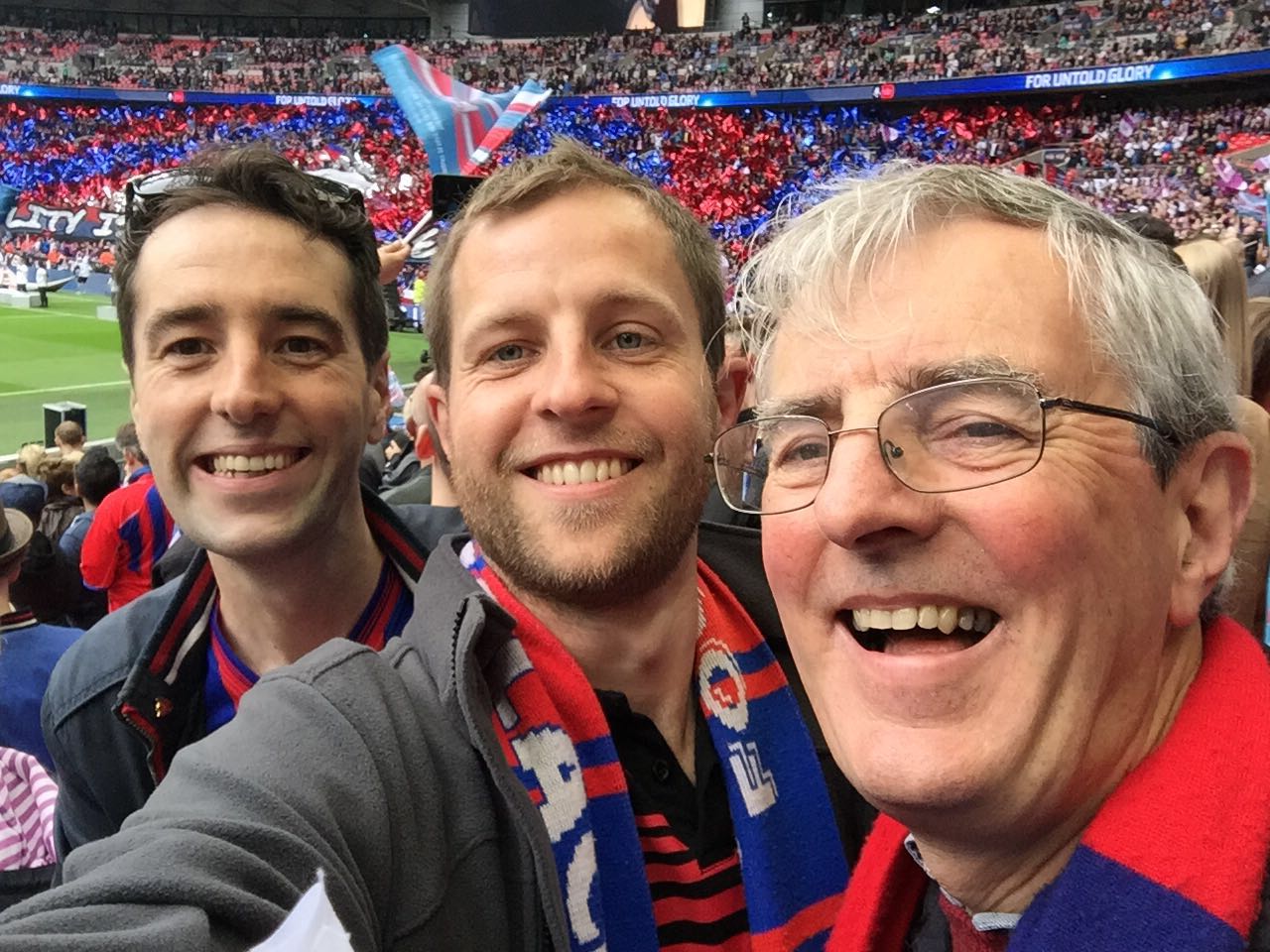 Watching Palace in the remaining 17 years has brought me closer to my dad; we now sit together in the Main Stand at Selhurst Park. I still have my favourite piece of football memorabilia, which is a red and blue scarf that his sister Nuala, my auntie, knitted for him in the mid-70s when Palace changed their colours from claret and light blue to scarlet and royal blue. The scarf is still in great condition today, although some games he does want to borrow it back (see the pic up at the top).

My football story took me from north-west Kent where I grew up to Selhurst Park, via Turin, but I wouldn't have it any other way. I've watched Palace at Wembley six times in total, including the FA Cup Final in 2016 where dad, Seb and I (pictured above) shared a really special moment that we'll never forget (and never forgive Mark Clattenburg for). Football fandom has changed a lot since I started going to games, and FYP has been a part of that, but I wouldn't change any of it - OK, except maybe growing that ponytail.

I now have a nine-month-old daughter, and the thing I am looking forward to most is taking her to her first game at Selhurst at some point, and passing on the Palace supporting tradition like my dad did for me. I hope it brings us as close as supporting Palace has for my dad and me, and I fully expect she'll be crying at Selhurst just like my brother did - although probably because by that point, Palace will be terrible again. 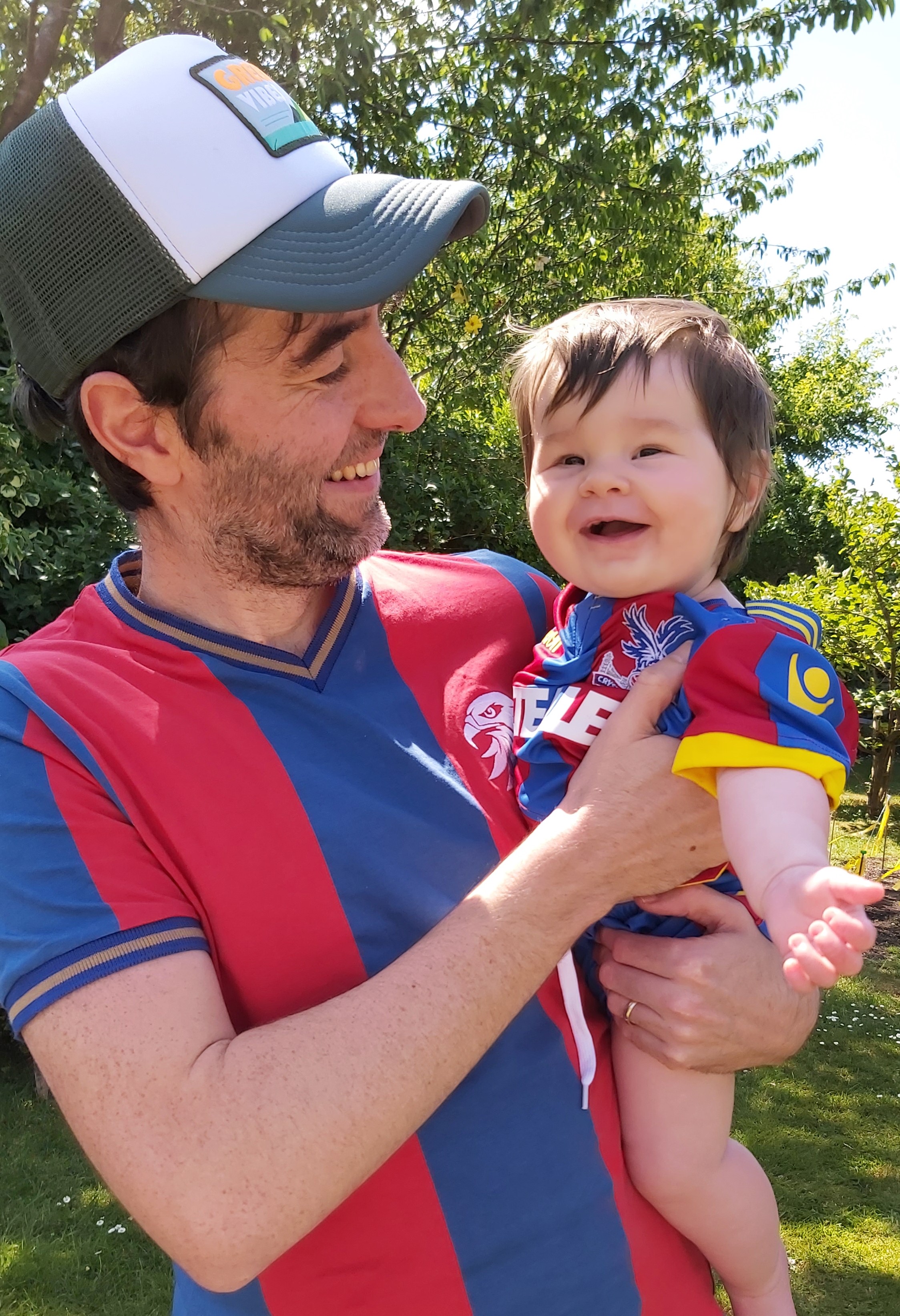 Thanks so much to Jim for sharing his brilliant story and pictures! If you’d like to see and hear more from him, you can find him on Twitter at @jimdalycomedy, or check out his football comedy videos over on his Jim Daly Comedy YouTube channel.

Keep checking back with TOFFS for the next instalment in the My First Football Memory series; if reading Jim’s story has got you reminiscing about your own favourite sporting memories, check out our catalogue of retro football shirts from throughout the ages, including a wide range of retro Crystal Palace shirts!