The ten most surprising players to have won the World Cup 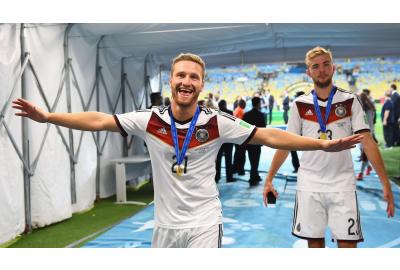 The ten most surprising players to have won the World Cup

As the non-stop drama of the recently concluded 2018 tournament has just shown, the FIFA World Cup remains the grandest stage of all when it comes to achieving football immortality.

It’s why the likes of Lionel Messi and Cristiano Ronaldo may never be truly satisfied with their careers until they’ve joined the pantheon of World Cup-winning greats like Pelé, Ronaldo, Diego Maradona and Zinedine Zidane, and why victorious French stars like Kylian Mbappé and Antoine Griezmann will feel they have secured their own sporting legacies for years to come.

However, it’s worth remembering that every winning squad has included up to 23 players, which means that nearly 500 players can lay claim to the title of “World Cup winner”. And, as we’ll soon discover, not every person on that list is a Gerd Müller or a Bobby Moore; in fact, there’s a whole bunch of relatively obscure players who you may barely remember, despite having won the game’s greatest prize.

So let’s dive in with a look at ten of the most unexpected names to have won the World Cup, succeeding where the likes of Eusébio, Paolo Maldini and Johan Cruyff failed...

Kicking off this list with a resounding “who?” is Aldo Donati, a Italian midfielder with a solid but uneventful career with Serie A winners Bologna and Roma during the 1930s, culminating in his inclusion in Italy’s 1938 World Cup-winning squad as a backup player.

What’s remarkable about Donati is that not only did he fail to make an appearance for the national side during the tournament, but he never ended up actually playing for Italy at all, making him one of very few players to technically win the World Cup without ever receiving a full cap. Donati’s playing career finished a few years later with a stint at Internazionale, for whom he made a comparatively impressive two appearances.

Another Italian journeyman who nevertheless managed to reach football’s highest pinnacle, Franco Selvaggi was a pacy but not particularly prolific centre-forward who managed to snag a spot in the 1982 World Cup-winning squad that also included the likes of Franco Baresi, Marco Tardelli, Paolo Rossi and Dino Zoff.

In that esteemed company, it’s perhaps unsurprising that Selvaggi didn’t make it on to the pitch during the tournament, in keeping with a largely undistinguished career that included low-scoring stints at larger teams like Udinese and Inter, as well as extended periods in the Italian lower leagues. He eventually finished his career in Serie D, earning only three caps for Italy in total, with the World Cup as his only footballing honour.

Liverpool fans may need to rack their brains a little to recall winger Bernard Diomède, who played three games for France in the early stages of their successful run to the World Cup title in 1998. Diomède had an impressive start to his career with Auxerre to earn his place in the World Cup squad, but it’s fair to say that he never really built on this momentum.

Transferring to Liverpool under Gérard Houllier, Diomède played only five games for the Reds in three years, before returning to France to run out for a succession of increasingly lowly teams and playing his last game at the age of 32. This career tailspin meant that his appearances in the 1998 World Cup squad were his last for France.

Another of France’s World Cup heroes of 1998, Stéphane Guivarc'h also enjoyed early career success with Auxerre, earning Golden Boots galore and winning a place as the lone striker for the France ‘98 team, where he played in the final and took home a winner’s medal - despite failing to score during the tournament.

However, the striker’s reputation remains coloured by his brief and ignominious spell for Premier League side Newcastle, where he scored only once in four games before being shipped off within months of signing. Although his subsequent stint Rangers and return to Auxerre were relatively successful, he was named as the Premier League’s worst ever striker by the Daily Mail in 2009 - prompting a furious reaction from the World Cup winner, who called it a “truly pointless stunt”.

Brazilian right-back Juliano Belletti, who won the World Cup with Brazil in 2002, was far from a poor player. Chelsea fans remember him fondly for his affinity for long-range strikes, but much of his club career saw him deployed in utility roles before eventually succumbing to injuries or being deemed surplus to requirements.

However, Belletti unquestionably had a sense of great timing. His only goal for Barcelona was the winner in a Champions League final, while his short spell with Chelsea brought him a league title and two FA Cups. Similarly, he found himself out of favour at international level for large parts of his career, but was part of a World Cup-winning squad despite limited game time during the tournament itself.

The second of four players on our list from the not-quite-vintage Brazilian class of 2002, Kléberson was a rising star during that tournament, being singled out for praise by manager Luiz Felipe Scolari and earning himself a high-profile transfer to Manchester United.

Unfortunately, that was about as good as it got for the midfielder, who made only 20 appearances in two seasons and is generally remembered as one of Sir Alex Ferguson’s most notable transfer flops. A move to Beşiktaş followed, and Kléberson’s career petered out with spells with a succession of low-profile Brazilian and US club sides.

Brazil’s victorious team in 2002 contained the talents of Ronaldo, Rivaldo and Ronaldinho, three of the most feared forwards to ever pull on the famous yellow shirt. It also contained Luizão, who never really broke into that elite lineup, but was nevertheless able to get his hands on a World Cup trophy that has so far eluded subsequent Brazilian superstars such as Neymar.

Luizão enjoyed a lot of success at Brazilian sides such as Palmeiras and Corinthians, but otherwise his career was the very definition of nomadic, with stints at 14 clubs in 15 years, including failed attempts to make his mark overseas at Deportivo La Coruña and Hertha Berlin. He played his last match at the age of 32, and played for Brazil only 12 times in total.

The final entrant from the 2002 Brazil squad, Roque Junior is another player whose early successes were ultimately somewhat overshadowed by ill-fated spells overseas following his World Cup success.

A club legend at Palmeiras and a sometime Brazilian team captain with 48 caps, Roque Júnior’s career was derailed by a loan spell from AC Milan to Leeds United, where he was sent off on his home debut against Birmingham City and was part of a shambolic defence that shipped 24 goals in his seven appearances. The centre-back never recovered his elite reputation, with his latter career including a short spell in Qatar.

You’d be forgiven for not knowing much about Simone Barone, a utilitarian midfielder who came off the bench twice during Italy’s World Cup-winning run in 2006, and isn’t really remembered for much else during a largely unspectacular career.

His best moments at club level came during a spell with UEFA Cup contenders Palermo between 2004 and 2006, and his moment of international triumph was followed by a transfer to Torino, with whom he was eventually relegated. Barone is another player whose only major honour is the World Cup, and his inclusion in the 2006 squad is still remembered with a certain befuddlement by many Italian fans.

Shkodran Mustafi’s involvement in Germany’s all-conquering World Cup squad in 2014 was a fleeting one, making the cut at the last minute due to an injury to Marco Reus before succumbing to a torn fibre muscle of his own midway through the tournament.

This peripheral involvement makes his status as a world champion feel all the more unbelievable to Arsenal fans, who have watched the defender struggle to recapture his Sampdoria and Valencia form at the Emirates, leading to him missing out on the 2018 German World Cup squad entirely. His future at Arsenal now looks uncertain - quite a comedown for a player who was proudly brandishing football’s greatest prize in an open-top bus in Berlin only four summers ago.