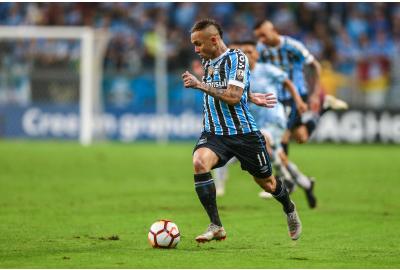 CONMEBOL’s Copa América tournament has always been a fantastic opportunity for the brightest stars of the South American game to shine on a global stage, and the 2019 edition has been no different.

With Brazil 2019 now wrapping up, fans across the world of football will be reflecting on the best performances of the tournament - and many will be dreaming of seeing some of the top South American talent from Copa América lining up for their clubs in the near future. If the newspapers and sports blogs are to be believed, then it would seem that a lot of European club managers have had exactly the same thought!

With that in mind, TOFFS has put together a list of five players who made a big impact at Copa América 2019 - and who may be about to go on to bigger and better things as a result.

Brazilian forward Everton is a player that will have been on a lot of clubs’ radars even before the 2019 Copa América, but his performances during the tournament will have only served to increase excitement around this talented attacker.

A product of Grêmio’s youth setup, the 23-year-old winger has emerged as a regular for the Brazilian Série A side since 2016, winning a prestigious Copa Libertadores title with Grêmio in 2017. Everton has developed a strong reputation as a goalscorer and creative dynamo, with Grêmio president Romildo Bolzan describing him as “one of the best players in South America, and maybe even the world”.

That’s a tall claim to live up to, but Everton’s performances at this year’s Copa América have vindicated that judgement. Taking on a key role on the left of the host nation’s attack in place of injured superstar Neymar, Everton has thrived at the tournament, notching two goals and an assist to help Brazil reach the final at the Estádio do Maracanã.

Naturally, this level of performance is attracting attention from some huge teams. The player has been linked to Manchester City for years, with reports suggesting that Pep Guardiola’s side is currently preparing a bid for the star - but in a recent interview with the Daily Mail, Everton himself suggested Manchester United as a side where he might also fit in well.

One way or another, it appears that the prospect of Everton (the player) turning out against Everton (the team) in the Premier League in the near future may not be too unrealistic...

The majority of the players on this list can be described as younger up-and-coming prospects - at 28 years of age, Duván Zapata doesn’t quite qualify as a young player, but there’s no denying the upward trajectory of his career.

The Colombian striker - brother of former AC Milan defender Cristián Zapata - has experienced a nomadic career since moving from South America to Italy’s Serie A, proving unable to settle in completely during spells at Napoli, Udinese and Sampdoria. However, his most recent loan spell at Atalanta has completely transformed Zapata’s reputation.

After failing to score in his first 10 games for Atalanta, Zapata kicked into high gear to notch 23 times in the remaining 27 games of the season, as well as recording seven assists. This helped Atalanta finish third in Serie A - their highest ever placing - to secure UEFA Champions’ League qualification for the first time, as well as reaching the final of the Coppa Italia.

Zapata was able to carry this fine form into the Copa América tournament, scoring two goals and helping Colombia advance to the quarter-final stage, where they were eliminated by Chile in a penalty shoot-out. Despite this, the striker has emerged from the competition with his newly stellar reputation very much enhanced.

With recent reports suggesting that Manuel Pellegrini could be readying a big-money bid to bring Zapata to West Ham United, it could be possible that the Colombian star will be looking to continue his career-best form in England soon...

Even despite an eye-catching cameo at the 2019 Copa América, you may not hear much about

Japanese teenage sensation Takefusa Kubo at the top level for a few years - but make no mistake, this is a player whose future looks dazzlingly bright.

Invited to join FC Barcelona’s famed youth academy La Masia at the age of 10, Kubo’s development in Europe was cut short when the Spanish club was found to have violated FIFA’s international transfer policy for under-18s, meaning the youngster had to return to FC Tokyo. He became the youngest player to score in the J.League at 15, and became a regular starter for FC Tokyo in 2019, still aged only 17.

Regarded as Japan’s answer to Lionel Messi, Kubo has now been snapped up by Barca’s archrivals Real Madrid, and will continue his development with their youth side Real Madrid Castilla in the coming season. Clearly, Real are keen to nurture Kubo’s precocious talent - and if his displays at the 2019 Copa América are anything to go by, there is much to come from the attacking midfielder.

Despite having only just turned 18 and making his competitive senior debut for Japan at the tournament, Kubo featured in all three of the team’s group-stage matches, including a mesmerising individual performance against Ecuador. The youngster almost made a huge splash by putting the ball in the net for what would have been an injury-time winner, but a VAR review ruled Kubo’s strike out for offside.

Nevertheless, with the might of Real Madrid behind him, it seems safe to say that there’ll be many more goals from Kubo in the years to come - both for club and country.

Argentina’s semi-final defeat to hosts Brazil means that Lautaro Martínez might look back on Copa América 2019 as a disappointment - but there’s no doubt that the young striker absolutely did himself proud at the tournament.

The 21-year-old established himself as a first-team regular for Argentine side Racing Club while still a teenager, earning him a €22.7 million move to Serie A with Internazionale in July 2018. In the last year, he also broke into Argentina’s senior national team, barely missing the cut for the 2018 World Cup, but more than making up for it with his 2019 Copa América displays.

Highlights of his Copa América campaign include the strike against Qatar that helped his side advance beyond the group stages, as well as the skilful backheel goal against Venezuela in the quarter-finals, which came as part of a man-of-the-match performance.

Having formed an impressive partnership with Lionel Messi during the tournament, Martínez has now reportedly caught the eye of Messi’s club ​Barcelona, who could be looking to activate Martinez's mammoth €112 million release clause to recreate the dynamic at club level. However, Inter manager Antonio Conte is keen to retain the youngster as his star striker, and will be unwilling to give him up without a fight.

One thing is for certain - with suitors of this calibre, it’s clear that Martínez did his job at Copa América 2019, even if his Argentina side as a whole fell short.

Lautaro Martínez wasn’t the only Argentina player to bolster his own reputation despite the side’s semi-final exit. Midfielder Giovani Lo Celso also enjoyed a fine tournament, and could be set to earn himself a big-money move as a result.

It could be said that Lo Celso is currently enjoying his second shot at big-time success, as the 23-year-old - who first caught the eyes of Europe through his performances as a teen playing for Argentinian side Rosario Central - previously failed to cement a place at Paris Saint-Germain. This led to the French champions shipping Lo Celso out to La Liga side Real Betis on loan.

At Betis, Lo Celso has experienced a real resurgence, scoring 16 goals from midfield in 45 appearances, and earning a permanent move to the side. Now, a string of impressive performances in at the Copa América in Brazil - including a goal in the quarter-final victory over Venezuela - has put the talented creative midfielder in the shop window once again.

Champion League finalists Tottenham Hotspur have been heavily linked with Lo Celso as a potential replacement for the wantaway Christian Eriksen, while Manchester United are also reportedly eyeing the star as an option if Paul Pogba leaves - but with an £88 million release clause, Lo Celso will not come cheap for either team.

Regardless of whether a transfer goes through this summer, Lo Celso can reflect positively on an ascendant career path that’s taken him from PSG misfit to one of the most sought-after midfielders in the world.

If you’ve been fired up by the stellar performances of these Copa América stars, check out our full range of retro international football shirts at TOFFS, which includes classic kits inspired by some of the greatest South American sides in history. Whether you’re looking for retro Brazil kits, old-school Argentina shirts or classic Colombia tops, TOFFS has you covered!